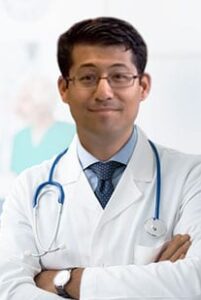 Board-certified by the the American Board of Plastic Surgery and with the Certification of Added Qualification (C.A.Q) in Hand Surgery, Dr. P. Hiroshi Goshtasby, M.D., F.A.C.S. is a highly skilled and experienced surgeon specializing in plastic, reconstructive, and hand surgery at his private practice in Newport Beach, California. He has been an active staff member of Hoag Memorial Hospital Presbyterian since 2010, and his clinical office is conveniently located in the exclusive Fashion Island district of Newport Beach.

Dr. Goshtasby (Dr. Go) underwent 17 years of rigorous training to fine-tune his skills as a proficient and accomplished physician. His quest for knowledge began at Northwestern University in Evanston, IL, where he was on the Dean’s List for academic excellence and was a member of several honor societies. After excelling in his studies at Northwestern University, obtaining a Bachelor of Arts degree in Biochemistry in 1997, he moved to Boston, MA to study and receive his medical degree from the prestigious Tufts University School of Medicine, where he served as Class President.

Upon graduating from Tufts University School of Medicine in 2001, Dr. Go underwent five years of rigorous and demanding residency training in General Surgery that he completed in 2006 at York Hospital, affiliated with Pennsylvania State University in York, PA. It was there that Dr. Go developed a solid foundation in surgical technique and critical patient care as he rotated on all of the surgical specialties and covered in-house trauma call for all five years, serving as Chief Resident during his final year.  In 2007, Dr. Goshtasby achieved Board Certification by the American Board of Surgery.

To further specialize his training, Dr. Go went on to Buffalo, NY to complete in 2007 an orthopedic-based fellowship in Hand Surgery at the Hand Center of Western New York, affiliated with SUNY Buffalo. Finally, Dr. Go spent three more years of focused training in the fully accredited and specialized Plastic and Reconstructive Surgery Fellowship at Wright State University in Dayton, OH, serving as Chief Resident during his final year. Dr. Go has performed several thousand procedures during his nine years of post-graduate residency and fellowship training, including nearly 2,000 procedures just during his Plastic and Reconstructive Surgery training, which he completed in 2010.

With his extensive surgical background and having passed the rigorous written and oral board examination requirements, Dr. Go achieved further board-certification by the American Board of Plastic Surgery in 2012, as well as additional certification (C.A.Q.) in the Subspecialty of Surgery of the Hand in 2013, making him one of only a handful of surgeons to have achieved triple board-certification status in General Surgery, Plastic and Reconstructive Surgery, and Hand Surgery.  These days, Dr. Go focuses his practice predominantly on Plastic, Reconstructive, and Hand Surgery and has stayed on top of his board maintenance of certification (M.O.C.) activities in those specialties while allowing his general surgery boards to conclude in 2017.

After opening his private practice in Newport Beach, CA in 2010, Dr. Go became an active member of the American Society of Plastic Surgeons (ASPS) and was also inducted as a Fellow of the American College of Surgeons (FACS), which is an honor bestowed upon select surgeons only after critical peer review and analysis of their clinical practice and surgical skills. In addition, Dr. Go is an active member of several exclusive professional organizations, such as the Orange County Society of Plastic Surgeons (OCSPS), the American College of Surgeons (ACS), and the American Medical Association (AMA). Further, Dr. Go is an active staff member and serves the community taking emergency room call at the world-renowned Hoag Memorial Hospital Presbyterian (ranked #1 hospital in Orange County) in both the Newport Beach and Irvine locations.

Throughout his surgical training and practice experience, Dr. Go’s work has appeared in numerous national and international publications and presentations discussing advances in the field of cosmetic, hand, and reconstructive surgery. His most recent publication in the Aesthetic Surgery Journal discusses an interesting case of pyoderma gangrenosum in a breast reduction patient, which he presented at the annual national meeting of the American Society for Aesthetic Plastic Surgery (ASAPS). He has also been involved with multiple research projects, starting in his undergraduate years at Northwestern University and continuing throughout residency, fellowships, and private practice.

Dr. Go has received several research grants to pursue his projects and was the recipient of the Annual Resident Research Paper Award at Miami Valley Hospital in Dayton, OH, as well as the Outstanding Manuscript Award and All-Star Scholar Award for Research at York Hospital in York, PA. Dr. Go also completed a medical mission trip to Asuncion, Paraguay, where he was involved in several dozen complex cases to help correct cleft lip/palate deformities, burn contractures, microtia ear reconstructions, functional rhinoplasties for nasal deformity reconstruction, hand surgery for syndactyly and polydactyly, and other congenital deformities for the underprivileged and underserved local population in need. In addition, he strives to remain at the forefront of recent advancements in the field of Plastic and Reconstructive Surgery by attending critical national conferences and various continuing medical education (CME) programs in plastic surgery, attending the annual meetings for the American Society of Plastic Surgeons (ASPS) and American Society for Aesthetic Plastic Surgery (ASAPS) for the past several years.

In his spare time, Dr. Go enjoys spending time with his wife, daughter, and pet dog at their home in Newport Beach, CA. His hobbies include swimming, kayaking, exercising, and playing tennis. He is fluent in English and Japanese.